At the start of the 21st Century, the Democratic Party can look back on a proud history — a history not just of a political organization but of a national vision. It is a vision based on the strength and power of millions of economically empowered, socially diverse and politically active Americans. Over two hundred years ago, our Party's founders decided that wealth and social status were not an entitlement to rule. They believed that wisdom and compassion could be found within every individual and a stable government must be built upon a broad popular base. 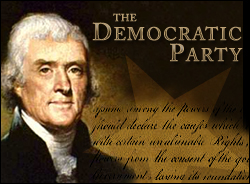 The late Ron Brown — former Chairman of the Democratic Party — put it best when he wrote, "The common thread of Democratic history, from Thomas Jefferson to Bill Clinton, has been an abiding faith in the judgment of hardworking American families, and a commitment to helping the excluded, the disenfranchised and the poor strengthen our nation by earning themselves a piece of the American Dream. We remember that this great land was sculpted by immigrants and slaves, their children and grandchildren."

Thomas Jefferson founded the Democratic Party in 1792 as a congressional caucus to fight for the Bill of Rights and against the elitist Federalist Party. In 1798, the "party of the common man" was officially named the Democratic-Republican Party and in 1800 elected Jefferson as the first Democratic President of the United States. Jefferson served two distinguished terms and was followed by James Madison in 1808. Madison strengthened America's armed forces — helping reaffirm American independence by defeating the British in the War of 1812. James Monroe was elected president in 1816 and led the nation through a time commonly known as "The Era of Good Feeling" in which Democratic-Republicans served with little opposition.

The election of John Quincy Adams in 1824 was highly contested and led to a four-way split among Democratic-Republicans. A result of the split was the emergence of Andrew Jackson as a national leader. The war hero, generally considered — along with Jefferson — one of the founding fathers of the Democratic Party, organized his supporters to a degree unprecedented in American history. The Jacksonian Democrats created the national convention process, the party platform, and reunified the Democratic Party with Jackson's victories in 1828 and 1832. The Party held its first National Convention in 1832 and nominated President Jackson for his second term. In 1844, the National Convention simplified the Party's name to the Democratic Party.

In 1848, the National Convention established the Democratic National Committee, now the longest running political organization in the world. The Convention charged the DNC with the responsibility of promoting "the Democratic cause" between the conventions and preparing for the next convention.

As the 19th Century came to a close, the American electorate changed more and more rapidly. The Democratic Party embraced the immigrants who flooded into cities and industrial centers, built a political base by bringing them into the American mainstream, and helped create the most powerful economic engine in history. Democratic Party leader William Jennings Bryan led a movement of agrarian reformers and supported the right of women's suffrage, the progressive graduated income tax and the direct election of Senators. As America entered the 20th Century, the Democratic Party became dominant in local urban politics.

In 1912, Woodrow Wilson became the first Democratic president of the 20th Century. Wilson led the country through World War I, fought for the League of Nations, established the Federal Reserve Board, and passed the first labor and child welfare laws.

A generation later, Franklin Roosevelt was elected president running on the promise of a New Deal. Roosevelt pulled America out of the Depression by looking beyond the Democratic base and energizing citizens around the belief that their government could actively assist them in times of need. Roosevelt's New Deal brought water to California's Central Valley, electrified Appalachia and saved farms across the Midwest. The Civilian Conservation Corps, the WPA and Social Security all brought Americans into the system, freeing us from fear, giving us a stake in the future, making the nation stronger.

With the election of Harry Truman, Democrats began the fight to bring down the final barriers of race and gender. Truman integrated the military and oversaw the reconstruction of Europe by establishing the Marshall Plan and the North Atlantic Treaty Organization. Truman's leadership paved the way for civil rights leaders who followed.

In the 1960s, President John F. Kennedy challenged an optimistic nation to build on its great history. Kennedy proclaimed a New Frontier and dared Americans to put a man on the moon, created the Peace Corps, and negotiated a treaty banning atmospheric testing of nuclear weapons. Lyndon Johnson followed Kennedy's lead and worked to pass the Civil Rights Act and Voting Rights Act. Kennedy and 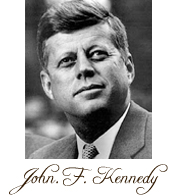 Johnson worked together to end the practice of segregation in many southern states. Following Kennedy's assassination, Johnson declared a War on Poverty and formed a series of Great Society programs, including the creation of Medicare — ensuring that older Americans would receive quality health care.

In 1976, Jimmy Carter was elected president, helping to restore the nation's trust in government following the Watergate scandal. Among other things, Carter negotiated the historic Camp David peace accords between Egypt and Israel.

In 1992, Arkansas Governor Bill Clinton was elected the 42nd President of the United States. President Clinton ran on the promise of a New Covenant for America's forgotten working families. After twelve years of Republican presidents, America faced record budget deficits, high unemployment, and increasing crime. President Clinton's policies put people first and resulted in the longest period of economic expansion in peacetime history. The Deficit Reduction Act of 1993 — passed by both the House and Senate without a single Republican vote — put America on the road to fiscal responsibility and led to the end of perennial budget

deficits. Having inherited a $290 billion deficit in 1992, President Clinton's last budget was over $200 billion in surplus. The Clinton/Gore Administration was responsible for reducing unemployment to its lowest level in decades and reducing crime to its lowest levels in a generation. In 1996, President Clinton became the first Democratic president reelected since Roosevelt in 1936. In 1998, Democrats became the first party controlling the White House to gain seats in Congress during the sixth year of a president's term since 1822.

In the 2000 elections, Democrats netted 4 additional Senate seats, one additional House seat, and one additional gubernatorial seat. Vice President Al Gore won the popular vote for President by more than 500,000 votes. In 2001, Democrats regained control of the Senate under Majority Leader Tom Daschle, while Democrats swept to victory in races all across 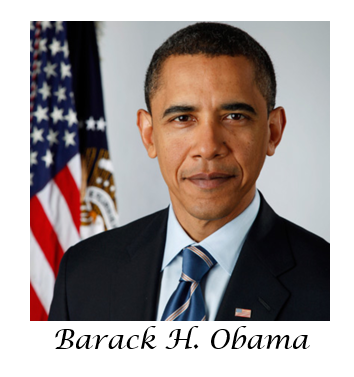 the country, including races for Virginia Governor and Lt. Governor, New Jersey Governor, and 39 out of 42 major mayoral races including Los Angeles and Houston.

While we have accomplished a great deal — as a nation and a Party, we must continue to move forward in the 21st Century. We must work to incorporate all Americans into the fabric of our nation. The history of our next hundred years can be seen in the gorgeous mosaic of America, from the wheat fields of Nebraska to the barrios of New York City, from the mountains of Colorado to the rocky coast of Maine. The Democratic Party is America's last, best hope to bridge the divisions of class, race, region, religion, ethnicity and sexual orientation. We will succeed if we continue to govern by the same principles that have made America the greatest nation on earth — the principles of strength, inclusion and opportunity. The Democratic Party is ready to take advantage of the opportunities we have and meet the challenges we face.